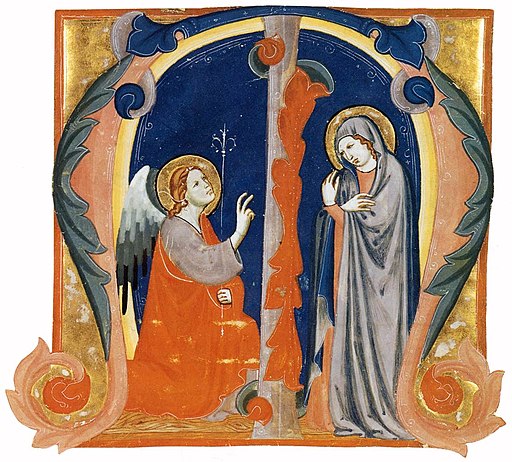 Chaucer can be hard to pin down. At many points, we can ask ourselves “Is he serious?” or “Is this all an elaborate parody?” At other, darker times we may question if he really was “evere . . . wemenis friend,” as Gavin Douglas put it, or a misogynist. Even the God of Love has his doubts about Chaucer’s writing on women, demanding that the poet repent of what he wrote about Criseyde “that maketh men to wommen lasse triste (trust).”

His religion can be just as puzzling. We have the anticlerical Chaucer of the Canterbury Tales. Far from being good sons of Benedict or Francis, his monk lives more like landed gentry and his friar might just hate the poor. And yet he concludes the final fragment with a tract on penance from a good priest (who might also be a Lollard): “A good man  was ther of religioun, / And was a povre Persoun of a Toun, / But riche he was of hooly thoght and werk.”

We also seem to have a liturgical Chaucer–or do we? His poems are filled with liturgical allusions–Troilus and Criseyde is even structured as a liturgy–to the point that William Dodd presents a Chaucer who “shows especial fondness for the ecclesiastical figure.” But Beverly Boyd in her study, Chaucer and the Liturgy, concludes that he “was not interested in ritual.” More recently, Mark Jones presents a Chaucer “disenchanted with ecclesiastical rites.”

Perhaps to make sense of all of this, we have to remember that this is the poet who crowns all of his work with a Retraction that Robert Boenig calls a “dismantling of one of the monuments of English literature by its own author.”

There’s a strange anchor in all this confusion, though.

Well, strange to us moderns maybe, but not to medievals.

Take a look at some early portraits of Chaucer.

Here’s one from Thomas Hoccleve, a contemporary of Chaucer’s:

Here’s another just a century after Chaucer’s death: 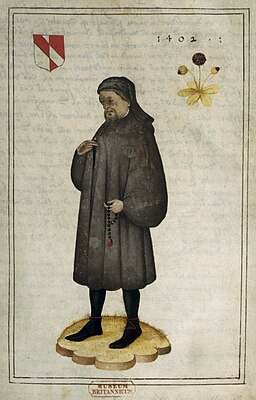 Take a look again. And then look at his empty hands in this Victorian painting, The Seeds and Fruits of English Poetry, by Ford Maddox Brown:

The first two portraits present Chaucer with a rosary while the Victorian painting retains the somber attire but chooses the reciting Chaucer of the Troilus and Criseyde frontispiece instead of the praying Chaucer.

I don’t think Chaucer with a rosary is a pious fiction. Though his relationship with medieval Christianity can seem ambivalent at times, Sherry Reames tells us that “the Virgin Mary occupies a unique position in his work as the only saint whose cult seems to be held up for actual imitation,” and William Quinn cautions us from refusing “to picture Chaucer at his beads.”

The poet of the raucous Canterbury Tales and translator of the Romance of the Rose also wrote Marian poetry. The final stanza of Troilus and Criseyde even ends by with a prayer to Christ to make us “for thi mercy, digne, / For love of mayde and moder thyn benigne.”

Since today’s Kalendar is illumined by Mary’s name, let’s take a look at one of Chaucer’s minor poems about her: “An ABC” or “Priere a Nostre Dame.”

The first title represents that it’s an abecedarian poem with each stanza starting with a word beginning with a letter in the alphabet (except the later additions of J, U, and W).

The second title, coming from the French source that Chaucer translates, hits closer to the heart of the poem as a prayer to Mary. Throughout the poem, the poet prays to Mary

To whom that al this world fleeth for socour,
To have relees of sinne, of sorwe, and teen (trouble),
Glorious virgine, of alle floures flour,
To thee I flee, confounded in errour.

The poet presents Mary as comforter and a favored Middle English alliterative pairing, “mayde and mooder,” and himself as a penitent whose “soule is worthi for to sinke.”

Through the poem, Chaucer beautifully crafts the petitioner’s desire:

Virgine, that art so noble of apparaile,
And ledest us into the hye tour
Of Paradys, thou me wisse and counsaile
How I may have thi grace and thi socour,
all have I been in filth and in errour.

The emphasis on the poet as someone who lacks, whether goodness, grace, or correct (perhaps orthodox) knowledge fills the poem. Chaucer often gives us an overly humble narrator, and the petitioner as wretch is pretty common in devotional prayer, but this is where Chaucer’s slipperiness starts to come out in the poem.

The poet who describes himself as “in filth and in errour” subtly begins the poem in error according to the orthodoxy of his religion. Rather than the conventional Maid and Mother, Chaucer’s Mary is the “Almighty and al merciable queene” in the very first line of the poem.

In the different genres of Christian prayer, the title, “Almighty,” tends to be reserved to God, such as in a collect. Think “Deus omnipotens,” “Almighty God.” But Chaucer begins his poem by addressing Mary with that title.

That’s a bit too far, Chaucer. And before we think this might be just run-of-the-mill Marian devotion, William Quinn reminds us that “though the idiom of medieval devotional lyrics often does not endure rigorous inquisition, the apparent heterodoxy of Chaucer’s first word…is a critical problem precisely becomes it looks so much like the error of an incompetent novice.” Chaucer is anything but an incompetent novice. The humility of his narrators always veils the precision of a master craftsman.

What should we do with this then? Quinn proposes a solution where the praying narrator is corrected through the prayer and comes to an orthodox understanding of Mary before it is finished. As the poem progresses, Chaucer comes to what Quinn calls a “more doctrinally orthodox and emotionally stable acknowledgment of Mary Coredemptrix as ‘vicair and maistress…'”

Chaucer plays with this figure of conversion in other poems. He ends his whole literary life with the Retraction that all at once rejects and advertises his other poems. In Troilus and Criseyde, the narrator leads us as readers through the courtly religion of love eventually to medieval Christianity in a slow, emergent way.

And that slow formation of the poet by Mary makes this poem even more Marian, not less (see my post here for more on that aspect of Marian poetry). Mary as poetic figure tends to change the inner landscape of the poet through the very space of the poem.

Among all the different, conflicting Chaucers we have, let’s add one more: Chaucer the Marian poet–“Chaucer at his beads.”