How religious were the Victorians? If we focus only on the canonical poets, then maybe not so much. Alfred Tennyson finds himself staring at the paradox of a divinely-created nature that is “red in tooth and claw” and a faith that suggests we believe what “we cannot prove” (In Memoriam 56.15, Prologue line 4). Thomas Hardy goes further and writes a poem where we follow a “slowly-stepping train…across a twilit plain,” to mourn a god who is only a “man-projected Figure.” And perhaps the clearest example of this trend that sticks out in all our minds when we think of Victorian religious sentiment (or lack thereof) is Matthew Arnold’s “Dover Beach”:

The Sea of Faith
Was once, too, at the full, and round earth’s shore
Lay like the folds of a bright girdle furled.
But now I only hear
Its melancholy, long, withdrawing roar,
Retreating, to the breath
Of the night-wind, down the vast edges drear
And naked shingles of the world.

The Sea of Faith is gone, nature is divested of the vestigia Dei, and God himself is dead.

What we just walked through is called the “secularization narrative” in Victorian studies. It makes a lot of sense, and there are many poets like these three that fit in it very well.

But recent Victorian scholarship has pointed out a few problems with this perspective. Charles LaPorte proposes that “such well-trodden literary histories of secularization, nonetheless, tend to lean heavily upon an idea that religion was actually dying in mid-century Britain.” But increasingly, we’re beginning to see that “the moribund condition of nineteenth-century British Christianity now seems far less evident than it has seemed to us during most of the intervening period.”

The other problem is that we’re working with a narrow set of texts when we see this trend. The poets I pointed to above are all brilliant. Hardy is one of my favorite Victorians, and I’ve spent a lot of time, both through research and for personal healing, sitting with Tennyson in his grief. These three along with others that fit into the secularization narrative are part of the canon. The process of canonization always narrows our perspective down from what was actually being read at the time.

When we expand beyond the canon to popular texts we start getting a different picture. One very popular book that can be a good place to start is John Keble’s The Christian Year. Along with John Henry Newman, Keble was a member of the Oxford Movement. This was a group of High Church Anglicans who advocated for a return to traditional religious practices, such as liturgical rituals and vestments.

I suggest The Christian Year because it was so popular during the period, suggesting that this text may have resonated with a contemporary audience. Also, Kirstie Blair writes that it is “exemplary not just of the poetics of Anglicanism, but of the poetics of faith that would be practised in varying ways by succeeding generations of Victorian poets.”

First coming out in 1827, Keble’s The Christian Year is a collection of poems that do exactly what the title suggests, run through the liturgical year. Each poem commemorates a Sunday of the year or one of the feasts according to the Book of Common Prayer. The first two poems stand out a bit from the festal cycle of the others, commemorating the morning and evening respectively. That’s because the Sunday liturgy in Cranmer’s reform distills the liturgy of the hours to morning and evening prayer and links them intimately to the Sunday service.

Another reason to look at Keble to broaden our horizons when it comes to Victorians is that the annual cycle it works through starts today. It’s the first Sunday of Advent, and that means the liturgical year has started. Keble starts it off with the poem below, “Advent Sunday.”

“Awake!” What a way to start a series of poems, especially when the last poem led us through the “darkness” and “weariness” of evening. And isn’t this a time when it’s hard to wake up. For Keble this is the start of the year, but it really feels like the end of the year with the cold weather and coming holidays from school. It feels like the time to rest, and we need it. But Keble pushes back and cries “awake” and then blows a trumpet in our ear. 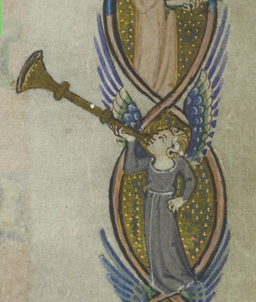 And in that description of the trumpet is hidden the temporal structure of this whole book. Let’s take a look at it:

That annual increase as the trumpet becomes louder and louder is an image of the liturgy that this book supports. Liturgical time is a helical scheme. It’s not a circle that suggests a perpetual return with no progress, but a spiral with each return getting the participants closer to the goal. “From year to year” participants are supposed to get more out of their experience, not less.

I think that might be a model for reading this book too. It’s not something that would be read through quickly once in a few days, but something that would be anchored in the very days it celebrates. Each reading would lead to a swelling of meaning with louder tone. Really, every book can be read in this slow, recursive way. Books like Keble’s that embed that structure within the text just remind us of that.

As I fight against the sleepiness of the ending year, I want to enter into that temporality of an ever-increasing fullness, an ever-increasing responsiveness. So I’m going to start reading Keble’s book of poems today, and slowly go through it once a week. Maybe I’ll even return to it in future years.

The Victorians are always much more complicated than we may think they are (just like us). And that’s very exciting because it means there are always new ways to look at them and a broader collection of texts to keep in mind. Join me in reading Keble, but don’t forget Hardy’s dead god and Tennyson’s violent nature “red in tooth and claw.” The Victorian era is all of that and more.

One thought on “Some Victorian Advent Reading”