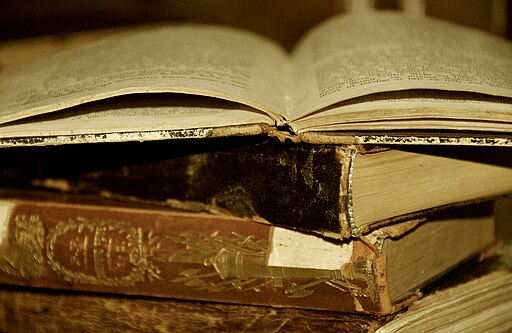 We’re leaving Arthurian Legend and moving toward some Anglo-Saxon texts in the following weeks. The Celtic Bretons are pushed back as the Saxons invade. The White Horse that Tennyson uses as a sign of civilization early in the Idylls becomes an epithet for the Saxons, who are now “Lords of the White Horse.”

But then the same story will become theirs. They will fight the Danes much as the Bretons fought them. The White Horse will be a sign of civilization in Chesterton’s epic poem about King Alfred just as it was in Tennyson’s epic of King Arthur.

The Saxon invasion did not end Brittonic culture though. They were pushed back to Cornwall and to Wales, and then left the island for the Continent, for Brittany.

And they have this wonderful understanding of books that I think Malory would approve of:

The Bretons believed in the demonic book.

It has different names, one in each region. In that of Quimper it is called Ar Vif, that is, The Living.

It is a gigantic book. When it stands upright, it has the height of a man.

The pages are red, the letters are black.

But he who goes up to it and opens it sees nothing except red. The black signs only become visible when one has fought with the Vif and overpowered it.

For this book lives. And it will not let itself be questioned. Only he who conquers it tears from it its mystery.

He must labor with it hours at a time as with a headstrong horse, until covered with sweat he stands in front of it and reads this book that he has tamed.

It is a dangerous book. One fastens it up with a thick padlock and hangs it on a chain which is attached to the strongest beam. The beam must be warped.

He who has subdued the Vif knows the secret names of the demons and knows how to summon them.

He does not walk like all the world. He hestitates at every step, for he fears to tread on a soul. He has experienced something.

I think that every real book is Ar Vif.

The real reader knows this, but far better still the real writer–for only the writing of a real book is actual danger, battle, and overpowering. Many a one loses his courage midway, and the work that he began in reading of the signs of the mystery, he completes in the vain letters of his arbitrariness. There exists only a little reality of the spirit in this book-rich world.