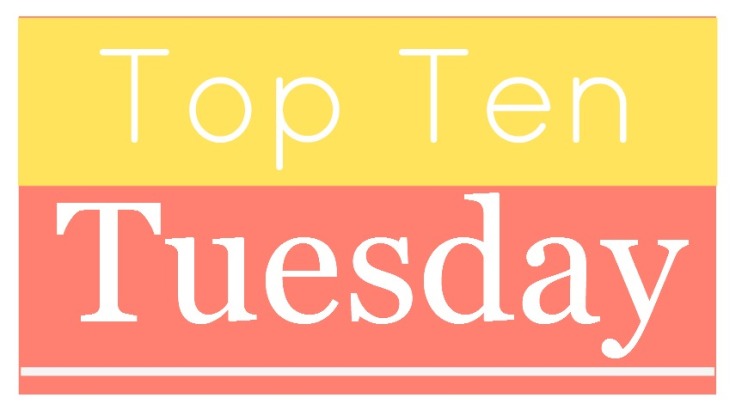 This time on Top Ten Tuesday, hosted by The Broke and Bookish, is all about bookish facts. I thought ten facts about me just wouldn’t be all that exciting, so my wife and editor is joining us today as we ask each other about some bookish facts.

First I asked Kristen some questions:

1. Why did you want to learn to read?

Survival.  I have really clear memories of the process of learning how to read – and of the neurotic terror that I would never catch on, and I started to make contingency plans for how to survive as an illiterate adult.  I was especially worried about road signs – I knew that my parents got IMPORTANT INFORMATION from them and I think that I had a few days where I was sure that I would be not only illiterate, but perpetually stranded and/or lost.  I wish someone had told me that no one follows the rules of the road. #childhoodwounds

It’s interesting to look back at that little episode  because I’ve never thought of learning to read as a rite of passage. Maybe (hopefully) the weight of the accomplishment escapes some as a matter of course – it’s another thing you learn, like riding your bike – rather than kicking off a sudden realization for a kindergartner that I will have to figure my shit out. Someday I will drive the car, read the signs, pay for things, make the dinner.

2. Have you ever thrown a book across the room. What was it and why?

3. Are there any books you regret getting rid of?

I don’t get rid of books! But I regret tossing my childhood/teen journals. At different times growing up I would just throw away my journals because I would look back and read something too mortifying (and too recent for me to see the humor, apparently). So every journal I ever had when I was young doesn’t exist because I would throw them away in a fit of anger or embarrassment. I think they would be really hilarious to have now.  Aside from the Anne Franks and the Zlata Filipovics of the world making the rest of us look bad, I think a lot of us wrote in our journals when we were at our most emotional…the crushes, the parental fights, the song lyrics, the ANGST OF IT ALL.  My journals wouldn’t have any daily entries for posterity, it would be back-to-back hormonal tantrums. That would be gold, and I’m sorry they’re gone.

4. If you had one chance to get a non-reader to love reading, what book would you give them?

Admitted non-readers I’ve come across have been cracked out on TV or video games (not judging!).  I think it would be important to show that the experience of reading can be as full and rich (more so!) than the screen experience. I would choose something transporting, absorbing, but nothing that could be construed as arduous. A short story. The Chrysanthemums or “A Good Man is Hard to Find.” Make ’em squirm.

5. What was the last book you read that changed your life?

Middlemarch was really amazing. I didn’t see that one coming.

And then she asked me some questions:

1. Why did you want to learn to read?

I actually didn’t want to learn to read. I was barely up to snuff in kindergarten, and I remember telling my first-grade teacher that I didn’t see why I needed to learn since my brothers could just read to me. And now I’m trying to convince students to do their readings…

2. What are your best reading conditions?

You know I’m terrible at multitasking. I can’t really read with any noise. I like to sit with natural light and coffee, with something to take notes. Even if I’m pretty sure I won’t get anything out of it, I feel anxious if there’s no way to take notes…

But reading Barchester Towers and Middlemarch while you played the harp was the best thing ever.

3. Any books you regret keeping?

After moving all those book boxes 3000 miles, all of them. But really it’s hard for me to imagine regretting keeping any book, even some trashy dime store novel. Not that I have any of those.  As Chesterton put it: “A good novel tells us the truth about its hero; but a bad novel tells us the truth about its author.” And since any author is another human being, any book has something important for us.

4. If you could have the power of any writer, who would it be?

I would want Gerard Manley Hopkins’s ability to “chime” words until they “fall, gall themselves, and gash gold vermilion.” I would want to give reader’s a home in the way that Robert Jordan’s voice did for me when I was younger.

But the problem is, if I had any of those, then I wouldn’t be me. Miguel de Unamuno talks about this. He says that “to want to be someone else is to want to cease to be he who one is.”

Or as Rabbi Mendel put it:

So I think I should want to be me.

5. What was the last book you read that changed your life?

Going through I and Thou again feels like every moment is life changing. But a part of me thinks that that particular book can’t be it. I’ve already been thinking about him and how I can approach students, and well everyone, as Thou for a while now, to varying degrees of success…

So I guess the book that I’ve read that’s affected me the most deeply recently is Thomas Hardy’s Jude the Obscure. That dark masterpiece reaffirmed a deeply held sense I have about hope and the nature of failure.

There’s this moment when Sue speaks to Jude:

Your worldly failure, if you have failed, is to your credit rather than to your blame. Remember that the best and greatest among mankind are those who do themselves no worldly good. Every successful man is more or less a selfish man. The devoted fail…

I know that doesn’t look very hopeful, and usually I get quite a bit of pushback when I say how much I like it, but I think that’s the inner depths of hope. It’s not that tomorrow will be better, but that no matter what happens tomorrow, we have dignity.

It also helped me become more comfortable as someone who focuses on Victorians, which is always shaken when I struggle getting through a Dickens novel.

If you’re participating in this week’s Top Ten Tuesday, please share your links in the comments below.

3 thoughts on “10 Bookish Facts about Us”